State and local governments are rethinking the Highway Trust Fund in the era of fuel-efficient vehicles.

The Highway Trust Fund model of collecting revenue to cover roadway maintenance and improvements through fuel tax was first established in the 1950s with the advent of the national freeway system and car culture. Through the model, fuel taxes emerged at all levels of government, creating a significant revenue stream to cover roadway costs. Over the years, however, that has changed. Improvements in fuel efficiency, the growth of hybrid and electric cars, and increasingly unreliable federal funding have meant that fuel taxes don’t go as far as they once did. As a result, state and local governments are considering road user charges (RUCs) as a way of covering fuel tax revenue losses.

The National League of Cities has released a new study that examines the pros and cons of RUCs. The organization believes that RUC systems show great potential to help communities, and argues that cities and states should consider experimenting with the technology.

RUC systems, also commonly referred to as a Vehicle Miles Traveled (VMT) tax or a Mileage Based User Fee (MBUF) systems, charge drivers for use of the roadways. With the growth of IoT technologies that can track mobility, RUC systems have come to the fore as a potential model for policymakers.

States have been testing RUC pilot projects since 2007, but they got a boost in 2015 with the passage of the Fixing America’s Surface and Transportation (FAST) Act which provided federal support for large-scale RUC pilots. The provision was a recognition on the part of federal policymakers that gas taxes weren’t enough to cover roadway costs. Since then, several states have started planning and piloting RUC systems. But as the NLC report notes, there are many potential challenges that localities will have to iron out in order to be successful.

RUC systems allow for a lot of flexibility. New technologies give policymakers the ability to quantify mobility in myriad ways, which means policymakers have wide latitude in determining user fees. These data can also empower local leaders to create RUCs that work toward policy goals beyond simply fixing potholes. Many cities are considering building in congestion pricing to cover periods of peak demand and encourage mass transit ridership. Carpool lanes could also become toll lanes. Cities have also considered adding fees onto taxi trips – an idea which, not surprisingly, has drawn criticism from taxi operators and rideshare companies like Uber and Lyft.

As with any new system, inclusion is also an issue. Data in the NLC report shows that the public broadly accepts the idea of an RUC system as a replacement for the fuel tax, but have questions about the details. Users would presumably have to opt-in to some type of technology to support tracking and if autodrafts or other forms of cashless payments are chosen the system could block out residents who are unbanked. 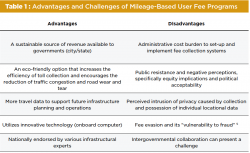 Additionally, states and localities will have to think through how to integrate a technology-enabled RUC system into their existing DMV workflows. Many DMVs rely on legacy technology that may not be able to handle IoT devices or modernized billing. It’s also likely that an RUC system would have to be phased in as people’s existing registrations come due so that they can be made aware of the changes and on-board any new devices. The new technology required to support an RUC system also comes with a significant startup cost that local governments will have to find resources for in order to get off the ground.

The NLC report offers several case studies of major pilots designed to help cities get their arms around these considerations. Ultimately, the report says, localities should be prepared for a lot of planning, transparency and outreach in order for projects to be successful.