Brookings: City Budgets Under Pressure In The Trump Era

A new report released today by the Brookings Institution shows that city budgets are likely to face additional pressure under the Trump administration as policymakers move away from federalism. Going forward, federal funding for programs is likely to go down, even while the demands on cities hit new highs.

Cities have a variety of mechanisms available to raise revenue including increases in property and sales taxes or adding user fees for city services. But there are limits as well. Political stigma often makes it difficult for cities to fund projects or programs through municipal bond issues. State-level preemption laws have also placed heavy constraints on municipal autonomy when it comes to raising local minimum wage rates or building out local infrastructure to support economic growth.

According to the report, most states impose binding property tax or expenditure limitations on cities in an effort to keep municipal tax rates in check. This can limit a municipalities options when it comes to dealing with severe budget pressure like cities experienced in 2008. It can also make it harder for cities to remain resilient during more episodic drops in revenue as during a recession or just after a natural disaster. Not surprisingly, cities that have taken steps to align their local economies with their tax base have a stronger fiscal position. 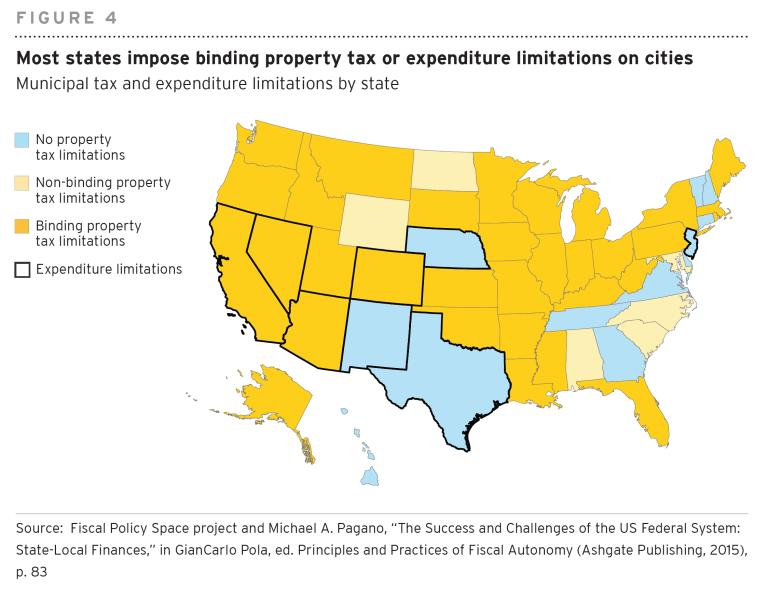 Report authors Michael Pagano and Christopher Hoene contend that Great Financial Crisis can provide an instructive recent example for municipal policymakers to benchmark against if they are trying to game out the impact of less budgetary support from state and federal governments. Milwaukee, Wisconsin, for example, raised its property taxes as much as possible during the GFC, but had mixed success as the property tax increases came as property values declined overall and the recession forced people into short sales and foreclosures. The city was forced to undergo hiring freezes and cuts to municipal employee benefits and raise fees for water filtration, parking permits, and other services. Cities that begin planning ahead could potentially avoid some of the pitfalls Milwaukee faced as the crisis deepened.

Looking ahead, the report suggests that city leaders will have to think critically about their fiscal condition and start positioning their cities more defensively. City leaders may also want to consider pushing for local tax reform if municipal tax rules no longer align well with the overall economic activity of their locality. “If cities are to successfully design, fund, and implement policies that provide high-quality educational opportunities, safe streets and neighborhoods, modern transportation networks, affordable housing options, and economic opportunities for all residents, they will need significant fiscal resources and flexibility. This imperative is particularly salient in an era of federal devolution of power and responsibility. Ultimately, expanding the fiscal policy space of cities will serve to increase economic growth, prosperity, and inclusion for the nation as a whole,” Pagano and Hoene write.