In 2002, Pat Flanagan, a 78-year-old conservation activist, fled the bright lights of the big city for outer San Bernardino County and the stark beauty of the Mojave Desert. “I’m a desert person,” Flanagan said. “I have to live here.”

Her home sits in a part of California that encompasses three deserts — the Mojave, the Colorado and the Sonoran — five national parks and monuments, and more than 10 million acres managed by the Bureau of Land Management for multiple uses, including conservation of threatened species such as the desert tortoise, desert bighorn sheep and Coachella Valley fringe-toed lizard.

People give up a lot to live in this remote region: “a social life, movies, concerts, shopping,” Flanagan said. “They come here for the peace and quiet.”

But soon after she arrived, that tranquility faced a new threat: a solar gold rush. The BLM’s offices were flooded with applications to build large-scale solar facilities in the desert. In response, the agency began a comprehensive planning process to identify areas appropriate for development. After eight long years, the state of California and the U.S. government officially approved the plan in September 2016. Now, the Trump administration has proposed a review of the plan, which could result in a major overhaul and upset an uneasy truce between environmentalists, locals and the solar industry.

The rush began soon after the state passed its first renewable energy standards in 2002. Then, in 2009, the federal government promoted renewable energy projects as part of its economic stimulus package. Suddenly, the state and feds agreed: Solar could help save the world from climate change while recharging a moribund economy battered by the 2008 recession.

Policymakers in D.C. and Sacramento may have seen the limitless solar resources of the desert as a panacea, but Flanagan and her neighbors dreaded the wholesale invasion of their wild, peaceful landscape. Large-scale solar facilities can blanket hundreds or even thousands of acres with massive panels. Depending on their size, siting and technology, solar facilities can destroy wildlife habitat, attract and kill unsuspecting birds, and trigger dust storms that race across disrupted desert soils. The construction of Ivanpah on BLM land near the Nevada border — one of the first and largest facilities approved at 3,500 acres — is estimated to have harmed dozens of adult desert tortoises and countless eggs and juveniles.

David Lamfrom, director of the National Parks and Conservation Association’s California Desert and National Wildlife Programs, arrived in the desert as a new staffer in 2008 just as the rush was accelerating. “There were no guidelines on how to do renewable energy on public lands,” he said. And national environmental groups were willing to let a few bad projects slip through while waiting for the completion of a multi-state environmental assessment to address larger ecosystem issues. “(They) believed the only way to avoid a climate crisis was to move forward on renewable energy,” he said. “And to do that, they said, ‘You gotta break a few eggs.’ The folks here in the desert, we were saying, ‘Those are our eggs.’” Despite his newbie status, Lamfrom convinced his bosses back in D.C. that they couldn’t sacrifice what he calls “an ecological gem” at the altar of quick renewable energy projects.

As local resistance grew, the BLM opened a collaborative process involving state and federal agencies, county and tribal governments, industry and conservation groups. In 2015, the BLM released a draft Desert Renewable Energy Conservation Plan (DRECP) encompassing all 22.5 million acres of public and private land in the desert region, including nonfederal land in the seven California desert counties. But counties raised serious concerns such as who was authorized to permit projects, and how solar development worked on private lands exempted from property taxes by state law, as well as how to preserve rural residents’ quality of life.

So the BLM divided the plan into two phases. Phase I encompassed the 10 million acres under federal jurisdiction, finalized in September 2016. Phase II includes renewable energy plans developed by each affected county for lands under its jurisdiction, many of which have been completed. 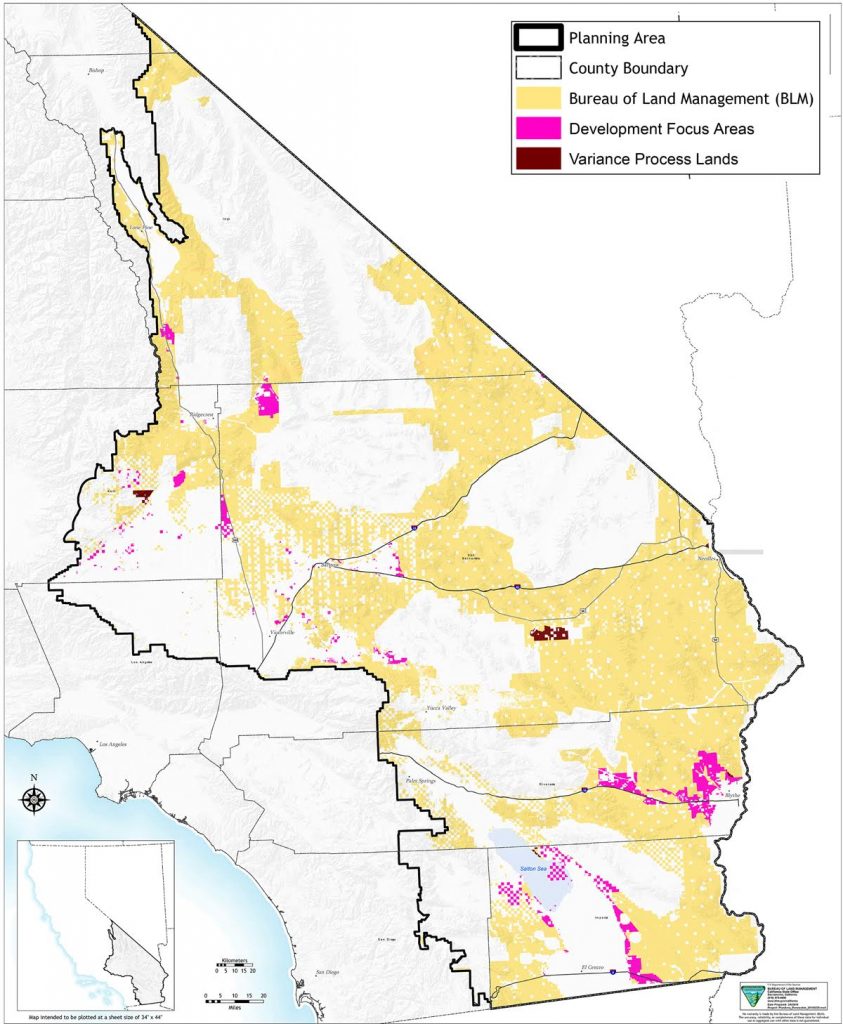 Energy Development Focus Areas are shown in pink, within the Desert Renewable Energy Conservation Plan. The Trump administration has proposed allowing more energy development on the 22.5 million acres covered by the plan.
Bureau of Land Management

Now, despite the plan’s long history of local dialogue, the Trump administration has proposed a review of it. In its February 2018 announcement, the BLM quoted President Donald Trump’s executive order directing federal agencies to review actions that could “potentially burden the development or use of domestically produced energy resources.” The BLM had withdrawn new mineral leases within the DRECP area, but soon after its announcement, it canceled that withdrawal, potentially opening up some areas to mining.

Renewable energy associations were concerned that the plan did not set aside enough public lands for development, the BLM said, and it solicited public comments to help set the parameters of a review.

“The original vision was renewable energy and conservation (of lands),” said Shannon Eddy, executive director of the Large-Scale Solar Association. “Now it’s a conservation plan.” The vast majority of the acres covered by Phase I are set aside for conservation or recreation; only 388,000 acres are designated as appropriate for energy development.

Even in those areas, environmental requirements limit industry activities. “Instead of streamlining approval in appropriate areas, it’s even harder to develop projects now than before the DRECP,” Eddy, a former Sierra Club staffer, said. She believes solar power is critical for combatting climate change and is frustrated by the restrictions. “We need to get used to seeing these (facilities) on the landscape. We’re at the point now with climate change where we don’t have the luxury of not doing projects.”

But Eddy’s industry never requested that the DRECP be reopened. Instead, in combined comments to the BLM submitted in March, the Large-Scale Solar Association and the Solar Energy Industry Association reiterated their concerns and suggested adjusting the existing plan and working out issues during implementation. The California Wind Energy Association was less conciliatory: Executive Director Nancy Rader said she doesn’t see how its concerns can be addressed without amending the plan. But, like Eddy, she said her group did not request that it be reopened.

The BLM’s notice of the review also mentioned local opposition, specifically from Riverside County and the city of Blythe. BLM spokesperson Sarah Webster cited two letters written in 2016. In one, John Benoit — the now-deceased chairman of the Riverside County Board of Supervisors, a key player in the DRECP process — maintained that the plan hindered renewable energy development on BLM land, thereby driving solar development to private lands within the county. The city of Blythe’s letter simply supported Benoit’s letter.

“We were somewhat surprised to see Riverside County referred to (in the notice) for reopening the plan,” said Juan Perez, director of Riverside County’s Transportation and Land Management Agency. He confirmed that the county submitted comments in 2016. But in his official response to the BLM’s 2018 solicitation for comments, Perez suggested gathering a working group to explore possible modifications of environmental requirements, within the framework of the existing plan. “It’s not the right time to jump to a reopening of the plan,” he said.

Frazier Haney, director of Land Conservation for the Mojave Desert Trust, believes that the DRECP review is just an excuse by the administration to open the desert to extraction. “If you look at the Federal Register notice soliciting comments,” he said, “they throw in grazing, off-road vehicles, and mining,” as factors to consider. Haney thinks that by stirring up those old issues, the administration will find an excuse to overhaul the plan.

It just might work. Although almost none of the plan’s participants call for reopening it in their recent comments to the BLM, many did reiterate their lingering concerns. And though some opposed reopening the plan, others — such as San Bernardino County, which includes half of all the acreage addressed in it — chose not to take a position.

Moreover, collaborative processes are inherently fragile, said Alison Gash, associate professor of Political Science at the University of Oregon. Gash has studied what makes some successful. “These things are based on relationships,” she said. “If any single relationship changes, the collaborative will change as well.” Effective collaboration requires equality among stakeholders. “If the government wants to reassert its power, it can do that,” she said. “But that’s essentially a member of the collaborative reneging on its commitment to the effort.”

The comment period ended in late March, and the BLM said that, by late spring, it will release a scoping report based on the 25,000 comments it received, most of which, according to conservation groups, supported keeping the plan in place. The agency has yet to announce its next steps and the report has not been released as of press time.

It’s not the first time the Trump administration had undone years of collaborative natural resource planning. Interior Secretary Ryan Zinke has reopened the multistate sage grouse conservation plan hammered out over a decade, to facilitate fossil fuel development. And the Interior Department reduced the size of national monuments in Utah in 2017, over the objections of tribal nations and some local communities.

If the BLM scraps the DRECP, some fear a return to the uncertainty and lawsuits of more than a decade ago. Back then, with few guidelines and an open desert, energy companies often proposed facilities on environmentally sensitive sites. Local and tribal groups fought proposals case by case, ultimately slowing development. Now, environmental groups might legally contest any revised plan that ultimately emerges.

Neither Flanagan nor those who have championed the desert along with her will concede ground easily. “The people here are extraordinary,” she said. “They are motivated and smart and they do their work. They’re not taking this quietly.”

Amy Mathews Amos is a writer and science communication coach who writes about wildlands, wildlife and other environmental topics from her home in New Mexico. This article was provided by High Country News.