Though the order and intensity of the 10 issues examined have remained relatively consistent over the past four years, the primary emphasis has shifted, with mayors expanding what is possible within their leadership roles to take action and ensure prosperity, fairness and resilience in their cities.

In addition to economic development, equity is a key concern for cities across the country, in terms of fairness and inclusivity in public safety, housing and education. Sixty-four percent of state of the city speeches included significant coverage of public safety issues.

The full list of concerns is outlined in the figure below: 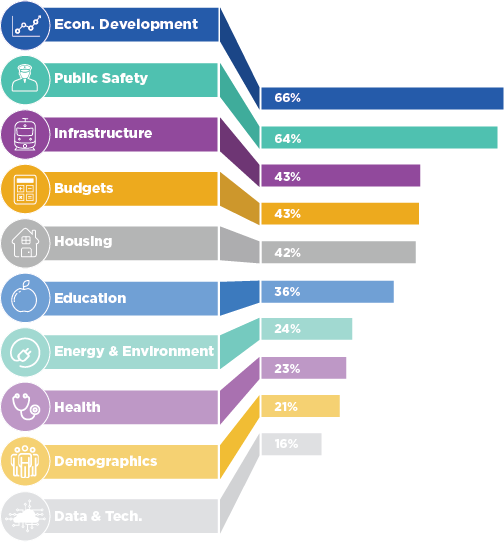 Mayors are also meeting resistance from a federal administration keen on disparaging America’s urban areas and state legislatures across the country blocking city-led initiatives. As CivSource has reported before, state-level preemption laws are on the rise throughout the country. These laws often tie the hands of Mayors, making it difficult for cities to be responsive to local needs.

“In the face of negative sentiments from the federal government, cities are pushing a positive agenda focused on building economic vitality and bridging divisions in our society. With or without intergovernmental partners, mayors will work from the bottom up to make things happen,” said Brooks Rainwater, senior executive and director of the Center for City Solutions at National League of Cities (NLC).