According to the results, just over half of the IT vendors included in the survey reported having grown their government sales in the previous 12 month period, versus only 38% of SLED vendors from other industry sectors. Respondents from the IT sector say that they expect to see this positive momentum carry into early 2017 as state and local governments work through various modernization plans and warm to renewable contracting structures that account for more current subscription-based pricing models.

IT purchasing tends to be cyclical in state and local governments. Typically more procurement awards go out near the end of the fiscal year in June when IT offices have a handle on how much money they will have left until new budget kicks in. Buying data in the Onvia report bears this out. 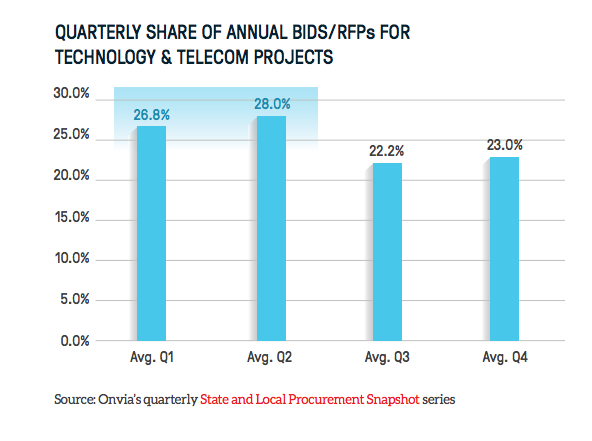 In addition to cyclical purchasing, state and local governments have warmed to the concept of efficient purchasing, which allows for multiple agencies to piggyback off of a statewide master contract. Rather than bid out each and every project, agencies can handle a significant portion of procurement through these umbrella vehicles. Onvia’s report suggests that based on recent awards, more state and local government agencies will be looking to efficient purchasing models along with subscription services. For traditional IT vendors that bid only for single awards, these trends may require a shift in how companies approach the procurement universe.

Looking ahead, top areas for purchasing in 2017 are likely to be cybersecurity technology, cloud services, business intelligence software and open government software.