The Gallery: Is the Smart City Concept Moving Beyond Cities? Illinois Outlines a Path to Becoming a Smart State

Despite articles proclaiming smart cities as focused on big cities or mega cities, or vendor-driven top-down agendas, the “smart city” should be a term that is up to the city to define. The concept encompasses some broad common elements – sustainable economic development, data-driven decision-making, innovative thinking and using emerging technologies – but to me, the concept is an ideal and open to adoption by all level of government organizations – cities, towns, counties, provinces and states. The state of Illinois is a recent example of how these concepts can apply beyond the city.

For IDC’s worldwide Smart City 2016 predictions, I stated that by 2017, at least 20 of the world’s largest countries will create national smart city policies to prioritize funding and document technical and business guidelines. I discussed the growing list of announcements, backed by actual funds, from countries like China, India, the UK, Singapore, the US and the United Arab Emirates, to name a few. And I believe this will still hold true as population growth continues to concentrate in urban areas and the growing adoption of the Smart City concept as a catalyst for change requires a more active role by national governments in setting a national agenda for funding-specific Smart City initiatives.

I discussed the impact this will have on cities; the fact that cities around the world rely on grants and other funding support from national governments, especially around new or innovative technology products. The increasing role of national governments, and the formation of a coherent Smart City strategy at the national level, will mean that national agencies are better educated in terms of Smart City solutions and the key technologies that need to be advanced. The result will be focused and prioritized funding streams for cities that are more in line with their need to test innovative Smart City technologies, such as vehicle-to-infrastructure communications, wearable computers, and cognitive computing. National governments also provide funding to universities for research and so there will be improved alignment between academic research and Smart Cities.

I also said that countries should carefully align Smart City strategy with export plans and industry/economic development plans. This will enable partnerships and investments that spur more growth in specific, desired industries and cities in a planned and proactive way. Governments should consider what Smart City products they can export along with partnerships to develop Smart Cities in other countries.

But I was over-focused on national level efforts, and left out the role that other levels of government might play. Especially in the US with its federated state structure, many of those statements above can apply directly to the role to states – in fact, you can almost replace the word “national government” with “US states” in all of the text. Which leads me to the efforts that the state of Illinois is undertaking.

If you go to the the Officer of the Chief Information Officer for the state of Illinois and head first to its transformation page, you will find a detailed discussion of the current challenges Illinois is facing in regards to technology. It’s actually quite an frank list of the state’s big challenges, summarized in this graphic and explained in detail: 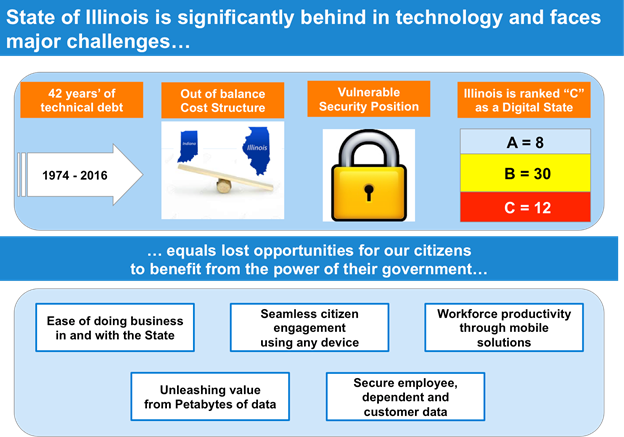 At the end of January, the state announced a plan for consolidating its IT department into a new agency, the Office of Innovation and Technology, to be led by the current state CIO, Hardik Bhatt. This consolidation is part of a broad-scale, and multi-pronged vision to address the challenges listed in the graphic above. As noted in this StateTech article, which details much of the reasons for the consolidation and plans, Illinois is the 30th state to consolidate its IT departments and have an IT-focused agency. As Mr. Bhatt points out this will not only reduce duplicative spending but bring together the 86 department CIOs and foster the ability to think strategically at the state level. Does this sound like similar thinking to what we talk about for smart cities? This isn’t a coincidence.

Mr. Bhatt also has a vision to create the first Smart State. IDC worked with Mr. Bhatt to define this concept which is available online at the Smarter Illinois website: http://www.illinois.gov/sites/cio/Initiatives/Documents/Smarter%20State%20-%20Illinois%20Case%20Study%20from%20IDC.pdf

his vision also aligns with the comments above relating to the role of national governments. The central themes to the Smart State include the triple role the state can play by:

Under the leadership of Marian Cook, Chief Strategy Officer for Enterprise IT, the state has developed a successful process to execute on its vision for a Smarter Illinois, and fulfilling this triple role. The process involved conducting a baseline survey for “Smart” initiatives across state departments, creating an Agency CIO working group that will evolve into an enterprise Center of Excellence, and pairing that with an external Advisory Board of global experts.  Each of these steps was no small feat, but each provided Mr.Bhatt and his team with valuable information, as well as providing the state with a template it can use to continue to foster innovative new plans. The paper goes into more detail than will fit into this blog, so I encourage readers to click on the link and read on.  In the end, the state of Illinois plans to move forward by:

I think this is a state to watch and learn from as they undergo a very large-scale transformation, and one that applies to other states as well as cities and counties. Let’s hope for their continued success and the opportunity for others to apply their best practices to their own efforts.

This post was originally posted at the IDC Smart Government Blog, part of the IDC Community

The Gallery is a forum for ideas and examination of matters facing state and local government. Readers, members of the media, academics or the business community are invited to submit guest columns to bailey{at}civsourceonline{dot}com. Member of the public sector? We’re interested in hearing from you too. CivSource does not endorse the views presented in The Gallery, but offers them in an effort to present more diverse coverage. CivSource will review all submissions but does not guarantee publication of all works submitted.