One in Three Employees Would Quit If Employers Drop Benefits

New research out from Accenture could have interesting policy implications for state and local governments. According to a report entitled, “Employer Beware: Workers Demand Health Coverage,” one in three workers would quit almost immediately if an employer makes the decision to stop providing coverage. 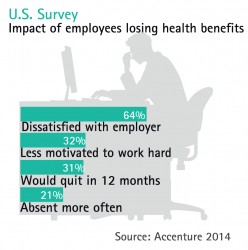 The study includes responses from more than 2,700 U.S. workers and found that three-fourths (76 percent) of workers see health insurance as a vital factor to continue working at their current employer. Of that cohort 31 percent said they would leave their employer within 12 months if they stopped receiving healthcare coverage. Half of that 31 percent said they would quit immediately.

For a firm with 1,000 employees earning an average salary of $50,000, turnover costs alone could climb to more than $3 million(1) in the first year. Employers must carefully consider whether health insurance cost savings outweigh corresponding turnover and productivity losses.

“I think what you see from the data, is that maintaining a healthcare offering is critical for employee retention. Obviously the imperative to do that is going to vary from industry to industry. Some industries that don’t rely on skilled labor may still opt out of providing healthcare, but if a company has invested time in a skilled employee, turnover is a bigger concern,” explains Scott Brown, Accenture in an interview with CivSource.

So what happens when employers do cut health insurance? Not surprisingly, the impact of employers not sponsoring health insurance would also have a significant negative impact on workforce productivity, including widespread employee dissatisfaction (cited by 64 percent of respondents), less motivation to work hard (32 percent) and increased absenteeism (21 percent).

Those drops in productivity and increases in turnover can have a direct and tumultuous impact on local economies, as well as on the demand for earned benefits from the government.

“Right now the average American with employer-provided insurance doesn’t fully understand the total cost of that coverage,” Brown explained. “Employers can shield a lot of the decision making process from employees when they choose these large group plans.”

According to data from the Kaiser Family Foundation, when employees have insurance through employers they pay between $2,000-$5,000 of the cost of that plan per year. Whereas employers are picking up another $10,000-15,0000 of that plan on average. 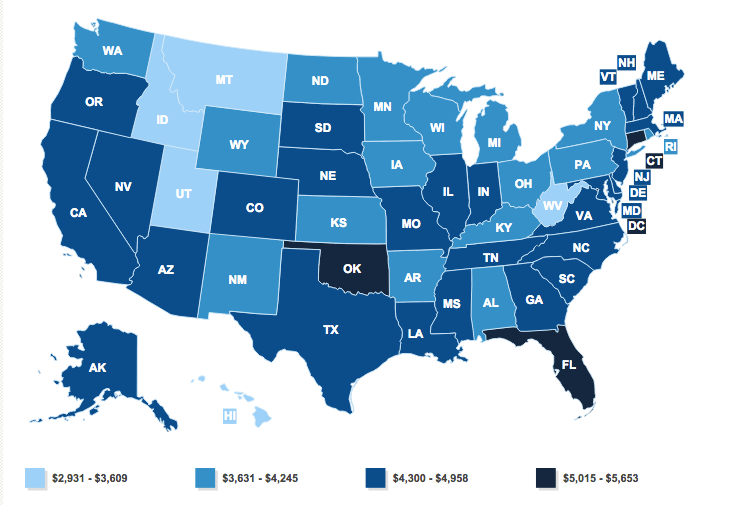 Despite this data, however, another study from the University of Minnesota’s State Health Access Data Assistance Center (SHADAC) shows the percentage of private sector workers who receive health insurance through their employers has fallen significantly since the early 2000s.

That study shows that employer-sponsored insurance has dropped from 53.7 percent in 2009 to 49.7 percent in 2013. Reasons for the decline include a mix of factors – fewer employers are offering insurance, but in some cases employees are also declining offers of coverage. The report says that these metrics are likely to continue shifting as the policy realities around the Affordable Care Act continue to shake out. Even so, if the Accenture data is any indication – employers concerned with turnover may do well to keep offering insurance. Watch this space.

1. Calculation based on average turnover costs of 20 percent of salary. Source: There are Significant Business Costs to Replacing Employees, Center for American Progress, November 2012.